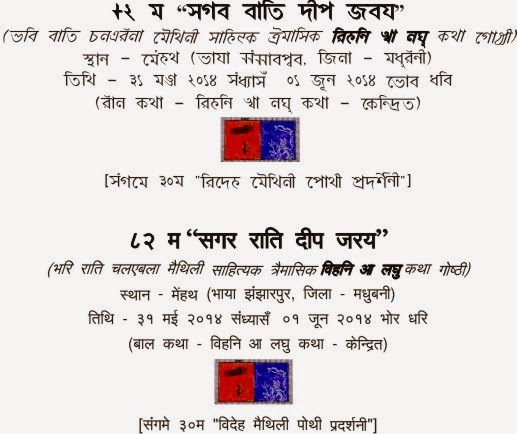 SAHITYA AKADEMI- FESTIVAL OF SHAME 2014
SAHITYA AKADEMI AND DOWNFALL OF INDIAN LANGUAGES
(IN SPECIAL CONTEXT OF MAITHILI LANGUAGE)
PART-I
When Maithili was recognised by Sahitya Akademi (National Academy of Letters- of India) way back in 1965, Late Ramanath Jha stated that his Maithili language is saved now (Maithilik Vartman Samasya, Ramanath Jha). He was wrong on this on two counts. What he referred to, was applicable, if it was applicable at all, only to Maithili -geographically located in Indian part. Maithili is spoken, natively, in India and Nepal both. After treaty of sugauli (ratified in 1816), which was in the aftermath of Anlo-Nepalese war of 1814-16, the hilly regions were incorporated in British India, including Nepalese speaking Darjeeling Area. Similarly in 1816 and 1860, the Britishers ceded some Terai region to Nepal. As a result Maithili Speaking Area, which were earlier ruled by Malla Kings (when Maithili was official language of the region), was ceded to Nepal. Even today some Maithili scholars (!!) refer to golden period of Maithili in the period of “Nepali” Malla Kings (Ramanath Jha, Introduction to Maithili Sahityak Itihas by Dr. Durganath Jha “Shreesh”). Ramanath Jha himself admits that during his visit to “Vir Library” of Nepal (Kathmandu) he came to know about the Nepal legacy (his monograph on kirtaniya natak, which he wrongly presents as Kirtaniya Nach) in respect of Maithili. So he cannot be blamed for his lack of knowledge in thisrespect. He was wrong on the second count also, and this second count was an artificial creation. He began a tradition of elitism and conservatism in SahityaAkademi, as a first convener of Maithili language; the tradition which got stronger and stronger in the last 49 years of Existence of Maithili in Sahitya Akademi. So he ensured that the liberal writers,like Sh. Harimohan Jha, attacking casteism and conservatism did not the award, though the year 1967 go unrewarded and the Ist award in 1966 go to a non-literary book in Maithili (academic book of Philosophy!!!). He himself was casteist conservative confused, the inter-caste marriage in Panji was well known to him, and it was apparent that the great navya-nyaya philosopher Gangesh Upadhyaya married to a “Charmkarini” and was born five years after the death of his father. But he informed it to Sh. Dineshchandra Bhattacharya in a distorted way. Sh. Dineshchandra Bhattacharya writes in “History of Navya-Nyaya in Mithila”- “The family which was inferior in social status is now extinct in Mithila…Gangesha’s family is completely ignored and we are not expected to know even his father’s name.” and he writes that all these information was given to him by Prof. R. Jha. So howcan this casteist conservative confused allow the award to be given to Sh. Harimohan Jha. So the Sahitya Akademi saved Maithili Language by recognizing it, as asserted by Prof. R.Jha, was wrong on these two counts.
(continued in Part II)
SAHITYA AKADEMI- FESTIVAL OF SHAME 2014
SAHITYA AKADEMI AND DOWNFALL OF INDIAN LANGUAGES
(IN SPECIAL CONTEXT OF MAITHILI LANGUAGE)
PART II
Now come to Nepal, the Prajna Sansthan and other organizations often recognize India Maithili writers, but SahityaAkademi of India does not recognize Nepalese Maithili writers, be it Seminar or poet meet, be it anthology of poem or prose published by the Akademi. Regarding treatment of Nepalese Maithili writers by Sahitya Akademi Sh. Ram Bharos Kapari “Bhramar” laments that there is demand in Nepal that they should also not award Indian Maithili writers/ publish them in their anthologies as reciprocity demands this.
The narrow mindedness of the Maithili advisory board of the Indian Sahitya Akademi has its origin in the organizations that is recognized by Sahitya Akademi, the basis of which is extra-literary credentials. These are pseudo organizations running on paper, political organizations or casteist organizations pocket-run by a few. The complete list is:
MAITHILI ORGANISATIONs RECOGNIZED (!!!) by SAHITYA AKADEMI
01. The Secretary
All India Maithili Sahitya Samiti
Tirbhukti
1/1B, Sir P.C. Banerjee Road
Allahabad-211 002
02. The General Secretary
Akhil Bharatiya Maithili Sahitya Parishad
C/o Dr. Ganapati Mishra
Lalbag
Darbhanga-846 004
03. The Secretary
Chetna Samity
Vidyapati Bhawan
Vidyapati Marg
Patna-800 001
04. The Secretary
Mithila Sanskritik Parishad
6 B, Kailash Saha Lane
Kolkata-700 007
05. The Secretary
Vidyapati Seva Sansthan
Mithila Bhavan Parishar
Darbhanga-846 004
06. The Secretary
Centre for the Study of Indian Traditions
Tantrabati Geeta Bhavan
Ranti House, Ranti
Madhubani-847 211

What is literary credential of Centre for the Study of Indian Traditions? Chetna Samiti and Vidyapati Seva Sansthan are casteist political outfits, vehemently displaying casteist attire of a great ancient poet, whose caste is still uncertain (VIDYAPATI), but who was certainly not Brahmin. All India Maithili Sahitya Samiti became non-existent even during the lifetime of Late Jaykant Mishra, same is case with Akhil Bhartiya Maithili Sahitya Parishad. Mithila Sanskritik Parishad has done a crime through an investiture ceremony of the the great Vidyapati, they tried to convert Vidyapati and “Maithili” language as Brahmin. When these non-existent organizations exercise voting power granted by Sahitya Akademi and chose a convener, it is not a coincidence that for the successive eight times only conservative people among the Maithil Brahmin caste, are chosen. The complete list is:
1. Ramanath Jha
2. Jaykant Mishra
3. Surendra Jha Suman
4. Sureshwar Jha
5. Ramdeo Jha
6. Chandranath Mishra Amar
7. Vidyanath Jha Vidit
8. Veena Thakur.

The result is not on the basis ofquality of the books but solely upon the caste based other considerations and the disease has its root in the faulty seedling that the Sahitya Akademi of India found through the faulty organisations.

(To be continued in part III)
SAHITYA AKADEMI- FESTIVAL OF SHAME 2014
SAHITYA AKADEMI AND DOWNFALL OF INDIAN LANGUAGES
(IN SPECIAL CONTEXT OF MAITHILI LANGUAGE)
PART III
What were the objectives of setting of this Akademi.
Sahitya Akademi was established (National Academy of Letters to be called Sahitya Akademi) by Government of India resolution No F-6-4/51G2(A) dated December 1952 “to set high literary standards, to foster and co-ordinate literary activities in all the Indian languages and to promote through them all the cultural unity of the country; to promote good taste and healthy reading habits, to keep alive the intimate dialogue among the various linguistic and literary zones and groups through seminars, lectures, symposia, discussions, readings and performances, to increase the pace of mutual translations through workshops and individual assignments and to develop a serious literary culture through the publications of journals, monographs, individual creative works of every genre, anthologies, encyclopedias, dictionaries, bibliographies, who's who of writers and histories of literature.”
The Akademi boasts of publishing “one book every thirty hours” and holding "at least thirty seminars every year” at regional, national and international levels, “ along with the workshops and literary gatherings-about 200 in number per year”.
The Akademi recognises “ Besides the twenty two languages enumerated in the Constitution of India”, English and Rajasthani as languages.
24 language Advisory Boards have been constituted by Sahitya Akademi “to render advice for implementing literary programmes in these 24 languages”.
THE COMPLETE LIST IS:
ASSAMESE
01. The General Secretary
Asam Sahitya Sabha
Chandrakanta Handique Bhavan
Jorhat 785 001 (Assam)

The Akademi gives prizes in 24 languages recognised by it for original and translated works. It gives “ special awards called Bhasha Samman to significant contribution to the languages not formally recognized by the Akademi as also for contribution to classical and medieval literature”; “It has also system of electing eminent writers as Fellows and Honorary Fellows and has also established fellowship in the names of Dr. Anand Coomaraswamy and Premchand”.
FESTIVAL OF LETTERS (SHAME)!!!!
In February every year, Sahitya Akademi “holds a week-long Festival of Letters; It begins with the ceremony to present the Akademi's Annual Awards for creative writing”.
In February every year there is need to examine whether Sahitya Akademi is fulfilling its objective, whether Sahitya Akademi is aware of the rich cultural and linguistic variety prevalent in India.
On scrutiny it is revealed that Sahitya Akademi believe in “forced standardisation of culture through a bulldozing of levels and attitudes” and it is not “conscious of the deep inner cultural, spiritual, historical and experiential links that unify India's diverse manifestations of literature”.

(TO BE CONTINUED IN PART IV)
SAHITYA AKADEMI- FESTIVAL OF SHAME 2014
SAHITYA AKADEMI AND DOWNFALL OF INDIAN LANGUAGES
(IN SPECIAL CONTEXT OF MAITHILI LANGUAGE)
PART IV
The Akademi boasts of publishing “one book every thirty hours” and holding "at least thirty seminars every year” at regional, national and international levels, “along with the workshops and literary gatherings-about 200 in number per year”.
If we see the data in respect of Maithili it comes out that every around 12 books should have been published in Maithili and the Maithili writers might have attended 30 seminars every year at regional, national and international levels and might have participated in 8 literary gatherings every year. The number of books published by the Akademi is pathetically low, and when see the assignments, through which these books get artificially prepared (be it translation, anthology or monograph), the the people getting these assignments are often related to the members of the advisory board (as the answer to RTI application by Sh. Vinit Utpal brings forth). The quality suffers, for which there is no readership.
How this Akademi failed?
And why this Akademi failed?
And what action should be taken against the Akademi for its intentional failure?
Firstly, Akademi is not the name of a man or woman. Akaemi or its member of advisory Board consists of persons, and if the group of persons is failing the Akademi, the language itself is to blame!
But language is not the name of a man or woman.
So, the people speaking that language are to be blamed for the failures of the Akademi.
Really!!
Even if it is partially true, the Sahitya Akademy cannot shirk from its responsibilities. How an advisory committee can be considered representative of Maithili speaking people (even that of India); when the Convener of that language is nominated by six organisations (recognised by the Sahitya Akademi for reasons best known to it), having no remote connection with literature. Sahitya Akademi sowed seeds of Acacia and expecting Mango fruit.
Having said that it is also true that the Akademi or any organisation can transform itself, but only when the conservative people representing these find pressure from the literary fraternity, change themselves or be replaced.
What is the solution?
The six organisations representing Maithili should be derecognised with immediate effect and a committee be set up to scrutinize the work done by Sahitya Akademi (in respect of Maithili) in the last 49-50 years. The literary fraternity has already taken initiative by establishing parallel Sahitya Akademi awards and literary meets. It should be taken further. All legal means be explored to take the Akademi to task. On all available forums, the fact be made clear that the literature being prepared by Sahitya Akademi through assignments, is not grammatically correct, that it is not upto mark and is of inferior quality. On all available forums, it should be made clear that the thin casteist looking (quantatively and qualitatively) pale Maithili literature, that is being shown by the Sahitya Akademi of India to the world has no readership or respect in its native speaking area of India and Nepal. And that Maithili has moved itself not because of Sahitya Akademi but in spite of it. — with Umesh Mandal and 99 others.
Posted by Unknown at 1:58 PM 0 comments